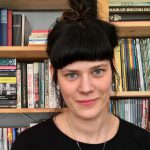 Anne’s dissertation examines individual and collective reactions of Polish-Jewish journalists who wrote for the Yiddish daily press in Warsaw about the events in Nazi Germany from the moment of Hitler’s rise to power in January 1933 up to the German invasion of Poland in September 1939 and the following months.

The history of the Yiddish press during the 1930’s, as well as the Polish-Jewish view on Nazi Germany, has received little scholarly attention so far. She considers Polish-Jewish journalists and editors as key figures in the process of acquiring knowledge about the persecution of Jews and political dissidents in Germany. They were procurers, keepers and interpreters of that specific knowledge and functioned at the same time as mediators within the Warsaw Jewish community and beyond.

What did the Warsaw Yiddish press write about the beginning persecution of Jews in Nazi Germany and in which way did the Polish Jewish journalists acquire non-official, firsthand news from Germany? How did the Polish-Jewish journalists’ pictures of German society and German Jews change and evolve – especially immediately before and after National Socialist rise to power? And finally, how was the gathered information processed by Polish-Jewish journalists adopted by the Warsaw Jewish community regarding different cultural, political and welfare protest movements?

By analyzing both newspapers and archival material relating to that time period, she tries to unmask the political discourse within the Jewish communities in Interwar Poland.

Her research will be a contribution to a paradigm shift within the historical sciences, in so far that the Jews of Poland and Eastern Europe are no longer seen as a monolithic block of passive victims of the Nazis. Rather, they are seen as active subjects and makers of history in their own right, who organized both protest and relief campaigns and who actively combated anti-Semitism as it increasingly encircled them.

Anne studied History and Jewish Studies (B.A.) as well as Eastern European Studies (M.A.) at Free University Berlin. Before studying, she worked as a volunteer in the memorial site Stutthof in Poland for the German NGO Action Reconciliation Service for Peace. Later she was a junior research assistant at the 16-volume document collection, “The Persecution and Murder of the European Jews by Nazi Germany 1933-1945” at the Institute for Contemporary History in Berlin. Between 2015 and 2018, she was a research assistant and graduate student at the Selma Stern Center for Jewish Studies Berlin-Brandenburg. She received funding from the German Historical Institute in Warsaw, the Zeitlehren Foundation, Warsaw University, Bielefeld University, the DAAD and others.

In 2016, she was a participant of the second German-Israeli Archival Colloquium organized by the University of Tel-Aviv and the Institute for the History of the German Jews in Hamburg.

She will use the Saul Kagan Fellowship to complete her dissertation. Anne’s advisors are Professor Dr. Gertrud Pickhan and Professor Dr. Stefanie Schüler-Springorum.