Kierra Crago-Schneider, PhD studied the day-to-day interactions among Jewish survivors (mainly those living in Displaced Persons centers), Germans, and American soldiers in postwar Munich specifically through their involvement with the postwar German economy.  Her dissertation title is “Jewish ‘Shtetls’ in Postwar Germany: An Analysis of Interactions Among Jewish Displaced Persons, Germans, and Americans Between 1945 and 1957 in Bavaria”.  Dr. Crago-Schneider has been interested in Shoah studies since she was a little girl and learned that her grandmother’s family fled from the Nazis. However, her interest in the rebirth of Jewish life in Europe was peaked when she met a good friend’s grandmother and conducted an oral history with her about her life after escaping the horrors of the Holocaust.  Dr. Crago-Schneider now works as a historian at the Claims Conference. 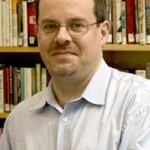 Jeffrey Koerber‘s dissertation, “Born in the Borderlands,” analyzes the prewar lives of young Jews in Vitebsk in the Belorussian Soviet Socialist Republic and Grodno in the Second Republic of Poland, examining those factors that shaped identity and how their sense of identity affected responses to the Shoah. Mr. Koerber’s research has taken him to archives in the United States, Belarus, and Poland, applying language skills in Yiddish, German, Russian, and Belorussian. Mr. Koerber’s dissertation advisor is Professor Deborah Dwork.  He was a Research Associate and Holocaust History Fellow in Wilkinson College of Humanities and Social  Sciences at Chapman University for the 2011-2012 academic year where he taught Holocaust history, as well as guest lectured and assisted in the administration of outreach programs.  Currently, he is a Research Associate in Chapman’s History Department and a Fellow at Clark University.

Richards Plavnieks is a Ph.D. Candidate in the Department of History at the University of North Carolina at Chapel Hill, where he is writing his dissertation under the supervision of Professor Christopher Browning. Richards has undertaken a case-study of the so-called “Arajs Kommando,” an all-Latvian volunteer police unit which, while operating under the auspices of Reinhard Heydrich’s Security Police and Security Service (Sipo-SD), murdered tens of thousands of Latvian and foreign Jews on Latvian soil in mass-shooting actions over a period of about two years. His aim is not only to reconstruct the activities of Viktors Arajs and his men and to probe their motivations, but also to examine the aftermath of their atrocities through the lenses of half a dozen judicial systems in the decades that followed.