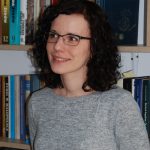 Alicja Jarkowska-Natkaniec, Ph.D., graduated from the Jagiellonian University with a degree in Jewish Studies.

Jarkowska-Natkaniec is also a co-author of two books (edition of book series “Ringelblum Archive”) and is the author of one book, “Forced Co-operation or Betrayal? Among the Cases of Jewish Collaboration in Occupied Krakow.” For four years, she ran academic courses at Jagiellonian University (particularly at the Institute of Jewish Studies). She is also a member of the European Association for Jewish Studies, the Polish Association for Jewish Studies and The Society of Friends of Krakow Culture and Heritage.

Since 2014, she has been participating in Seminary for the Young Scholars of the Holocaust at the Polish Center for Holocaust Research IFIS PAN (Centrum Badań nad Zagładą Żydów).