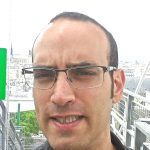 Noah Benninga received his Ph.D. from Hebrew University for his 2016 dissertation, the “Material Culture of Prisoners in Auschwitz” (advisor: Moshe Zimmermann). Adapting the theoretical work of Joel Fineman (“The Anecdote” and “New Historicism”) to witness narratives and testimonies, this project identifies objects and practices employed by prisoners in Auschwitz-Birkenau that constituted everyday life in the camp.

Benninga’s current project, “Fashion in Auschwitz: A Study of the Social World of the Metropolis of Death,” expands on his previous work, exploring the ambivalent position of the “prisoner elite” in the running of the camp.

Incorporating new sources such as physical evidence, prisoner art, and SS photographs, alongside witness testimonies and memoirs, his study focuses on the stochastic, unplanned and unregulated elements that interwove and conflicted with the official rules of the camp. These unwritten elements remain largely unresearched in scholarly literature, despite the decisive impact they had on the everyday life of the camp. The surprising degree of latitude that the prisoner elite had in fashioning their uniforms is a case in point, symptomatic of the power of this group in the camp, their privileged status, and their involvement in illegal trade (in SS terms) with the camp guards.

By investigating the phenomenon of prisoner fashion, this study seeks to provide a more concrete and nuanced picture of the camp economy, society, and corruption.