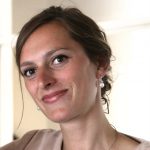 PhD Candidate in History at the University of Sheffield, United Kingdom.

Laurien Vastenhout has eared an MA Degree in Holocaust and Genocide studies (2014) and an MPhil in History (2015), both at the University of Amsterdam. Recently, she co-lectured a Comparative Genocide Studies MA course at the same University (2017).

Her dissertation examines the functioning of the Jewish Councils of the Netherlands, Belgium and France during the Second World War from a comparative perspective.  The historiographies of these Councils are predominantly national rather than comparative, and much of the scholarship has remained rooted in a moral-juridical framework. Despite recent attempts to take a more objective view of individual Jewish Councils, the analysis has not been extended beyond the small circle of Council leaders nor beyond the national framework. The aim of this research, by embarking upon a thematic approach covering four topics, is to adopt an overtly comparative approach to study the Jewish Councils in a detached, empirical way. This allows for a better understanding of the organisational structures and the complex nature of society from which they emerged in order to re-examine their key role in the fate of the Jewish communities they represented.

Laurien received a number of scholarships for her research in the Netherlands, Belgium, France and Israel. Amongst others from the White Rose College of Arts and Humanities (WRoCAH), the Prins Bernhard Cultuurfonds  (“Young Talent Award”, 2015), Yad Vashem (Summer Fellowship, 2016) and the European Holocaust Research Infrastructure (Research fellowship, 2016). Receiving the Saul Kagan Fellowship is a major opportunity to continue working in these archives and to research the subject in its entire complexity.