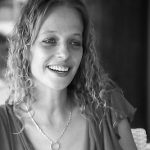 Aline received her BA from Leiden University in the Netherlands and is currently a graduate student in the Holocaust Studies program at Haifa University. Her thesis is about the transports from the Netherlands to the concentration camps in 1942 and 1943: what can be learned from the deportation lists regarding the prior logistical planning of these deportations? She also looks at the social composition of Dutch Jewry during the deportation period July 1942-November 1943: how did the Dutch Jews react to their persecution and the changes it caused in their daily life?
Next to that, the thesis also shines some light on the experiences of the deportees during their journey and shortly after their arrival.

Aline was co-researcher and image editor for the book ‘In Memoriam’, which she published in February 2012, together with Dutch author Guus Luijters. The book tells the story of the 18.000 Jewish, Sinti and Roma children who were deported from the Netherlands to the concentration camps. In November of that same year, an addendum to the book was published, with more than 500 new photos. The book launch was accompanied by a large photo exhibition in the Amsterdam city archives, which will be brought over to the Ghetto Fighters Museum in Israel in 2017.