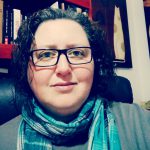 Natali Beige’s PhD dissertation studies Šiauliai region in Lithuania, during World War II and the Holocaust, highlight Jewish life in the provincial towns, and expose the various German and local Lithuanian forces that took part in the implementation of the Final Solution in the region.

Although an extensive historiography of the Holocaust in Lithuania exists, very little has been written about the history and the fate of the Jewish communities in provincial Lithuania. Thus, the research aims to examine the complex historical, social and political reality that prevailed in the region by focusing on the interaction among three groups: Germans, Jews and the local Lithuanian population. Through an integration of a variety of sources the research enables to identify the stages of persecution and extermination, learn about the relationship between the Germans and the Lithuanians, understand the connection between bureaucracy and ideology, and expose the various groups of perpetrators involved in the annihilation of the Jews in the Šiauliai region. An in-depth regional study can raise new important issues, contribute to the knowledge about Jewish life in the provincial towns and the fast and brutal elimination of these communities during the Holocaust.

Furthermore, the research raises questions that can be relevant to the destruction of Jewish communities in other rural Eastern European areas when considering factors such as the participation of the local population in the murders, their motivations, and how regional dynamics influenced the development of the Final Solution in those areas.