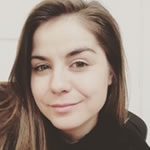 Marie-Dominique Asselin’s PhD project aims to look at the fate of the Polish Jews at the time of the Holocaust, as seen through the prism of court records.  The research will seek answers to the various questions related to everyday Jewish life and death in the ghettos, as well as to the nature of relationships between the Jewish and “Aryan” populations.

Ms. Asselin’s research will focus on the accused facing the courts, including their age, occupation, education, and whether they were first-time or repeat offenders. Furthermore, it will enquire into the types of offenses that were most likely to be tried by the courts, such as cases of theft, the receiving of stolen goods, insults, assault, etc., and focus on what the evolution of various types of criminal behaviour was over time between 1939 and 1942.

The research will also seek to explore the correlation between  “Jewish criminality” and the evolution of the Nazi policy of terror, and finally, it will look at the justifications of the verdicts.

Asselin’s work will pay particular attention to testimonies and trial records of Jews in order to subsume the human element and to gain a better understanding of the contacts between the accused and the court. The court records, especially the minutes of interrogations and depositions are sources of great value, because, unlike other legal records, they reveal defendants’ actual own words.

The research project will also look at the role of the Polish system of justice in shaping and changing the fate of Jews whose cases were heard by the courts. The study is an investigative effort into a new class of Holocaust-related sources and paves the way for other scholars interested in the history of the Shoah.  The massive amount of data to be generated by the research will help better understand the fate of the Jews before the onset of the “Final Solution” and, in many cases, it will enable the reshaping of the understanding of choices and challenges faced by the victims. This research project will also challenge the very concept of “bystanders” in an east-European setting.

Her supervisor is Prof. Jan Grabowski.